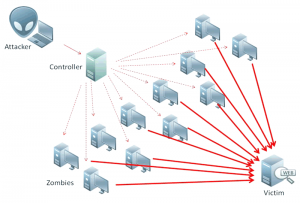 With the recent DDoS attacks on the Dyn servers that made the news by bringing-down such mega-sites as Amazon, Twitter, Netflix, Etsy, Github, Spotify, and PayPal, it’s a good idea to have some extra protection on place for your site.

DDoS is an acronym for “Distributed Denial of Service” attack. This is when a hacker (or group of hackers) take over infected computers and use them in an attack to bombard a single target with too many requests.  This causes the target computer to not be able to reply to any of the requests and become unavailable.

The WordPress Plugin Protection Against DDoS helps protect against this type of attack against your WordPress Login page.

Protection Against DDoS was created by WPChef who has three 5 star Plugins in the WordPress Plugin Repository.

The Plugin adds a simple, invisible (to the user) check to the login page that rejects all bots, and lets legitimate users in thereby drastically increasing your websites’ performance.  Simply install the Plugin and activate it.  There is nothing at all to configure.

Can it protect against any DDoS attack?

The Protection Against DDoS WordPress Plugin protects against DDoS CAUSED only by brute-force attacks. This is the most common cause for an live WordPress site to be brought down though.

What are the system requirements?

The Protection Against DDoS WordPress plugin only works on servers that support .htaccess file as it writes to this file  You do not need to make any changes yourself to this for for it to work.